The International Space Station is an artificial habitable satellite which is orbiting around the earth at an altitude of about 408 km with a speed of 28,000 km per hour. It circles the globe every 90 minutes. It is even visible to the naked eye. One can see ISS from nearly every area of Earth, at least at some point in time. The ISS appears as a slow moving bright white dot in the night sky.

This space station is actually experimental laboratory for new technologies and a platform for astronomical, environmental and geological research. It is a milestone for space explorations to uncover mysteries of the universe in the near future. This Space station (ISS) consists of Canada, Japan, the Russian Federation, the United States along with 11 Member states of the European Space Agency.

The Construction of the International Space Station began on 20 Nov 1998. Russia launched the Zarya module into orbit around Earth on a Proton rocket. The module was funded by America and other Sixteen countries were involved in this project. After Zarya, many modules were built and launched. 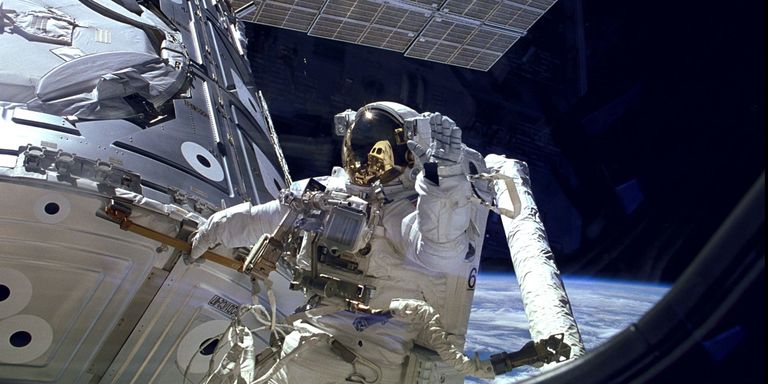 It took an astounding 136 space flights on seven different types of launch vehicles over the course of the station’s construction.

The beta angle of the station has to be considered at all times during construction. This directly affects the time of the station’s(docking spacecraft) exposure to the sun.

All Russian spacecraft and self-propelled modules are able to rendezvous and dock to the space station without human intervention. Russia’s future primary research module Nauka set to launch in the first quarter of 2018. Nauka will be equipped with the European Robotic Arm which will be able to relocate itself to different parts of the Russian modules of the station.

After completion of International Space Station, the station’s mass will be more than 400 tonnes.

The ISS travels an equivalent distance to the Moon and back in about a day. The space station’s solar arrays contain a total of 262,400 solar cells and cover an area of 27,000 square feet (2,500 square meters), it is more than half the area of a football field. A solar array’s wingspan of 73 meters is longer than a Boeing 777’s wingspan. Boeing’s wingspan is 65 meters. The ISS has 32,333 cubic feet of pressurized volume and weighs 930,000 pounds.

Inside the International Space Station

It is, of course, the largest artificial satellite that has ever orbited Earth. On-orbit software monitors approx. 350,000 sensors ensuring station/crew health and safety. Flight software exceeds 1.8 million lines of source code supported on the ground by a test environment comprised of another 3.3 million source lines of simulation software, and 11 million source lines of test scripts.

Water Recovery System of ISS reduces crew dependence on “delivered” water by 65 percent – from about 1 gallon a day to 0.34 gallon.

It has 8 miles of wire just to connect the electrical power system. That will be enough to connect a hairdryer in Newark, New Jersey, to a power plug in New York City.

The International Space Station sees about 16 sunrises and sunsets per 24 hours on average.

Inside the International Space Station, there are 2 bathrooms, a gym, and 360-degree view bay window. It has more livable room than a conventional room.

The human body tends to lose muscle and bone mass in zero gravity environments. All astronauts aboard the ISS thus have to workout at least two hours a day to combat these effects.

Oxygen in the International Space Station comes from a process called “electrolysis,” which involves using an electrical current generated from the station’s solar panels to split water molecules into hydrogen and oxygen gas.

Fifty-two computers control the systems on the ISS.

There is an Immortality drive a memory device inside the International Space Station that contains the digitized DNA of Stephen Hawking, Stephen Colbert, and Playboy model Jo Garcia.

The Olympic torch has even made its way to the Space Station and went outside into space on a spacewalk.

So far International Space Station is the greatest achievement of the mankind in space!

How to forget someone you don’t want to love anymore?

Megha Arya - February 27, 2017
0
First of all, let me give the necessary warning. If tried by an inexperienced layman, the method I am about to describe will surely be a...

Parul Shikha - March 20, 2017
0
Imagine you wake up with a newspaper in your hand featuring these headlines. Sad. Isn't it? But this problem is faced in many parts...